The art event of the summer – Painting with a Purpose – was held on Saturday, June 23rd at the Knoxville Museum of Art. More than 125 people gathered to experience the event, which featured wildlife and sporting artist Freddy Paske. 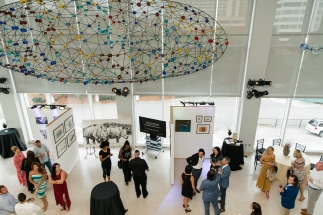 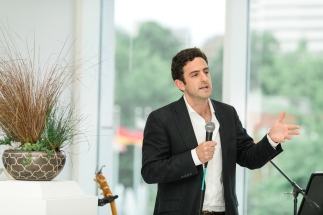 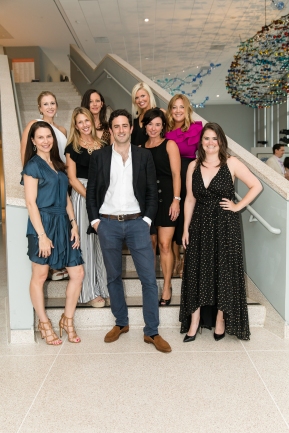 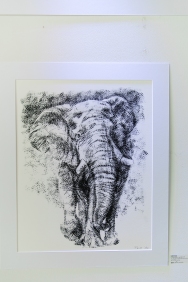 The London-based artist traveled to Knoxville to share his passion for our world’s most endangered species. A former member of the British Army, Paske uses a combat boot to create large-scale pieces of art. The use of the boot drives home a sobering point. “The anti-poaching effort needs – quite literally – more boots on the ground,” Paske explained. 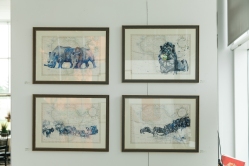 In 2017, Paske joined forces with a documentary filmmaker and an art photographer in a collaboration called “The Bigger Picture.”  They spent a month embedded with an anti-poaching team in Zambia, Africa. Paske spoke of the lack of resources he witnessed first hand.  “The works of art you see here tonight were inspired by my time in Zambia. The anti-poachers need our help, and I hope you will be inspired too.” 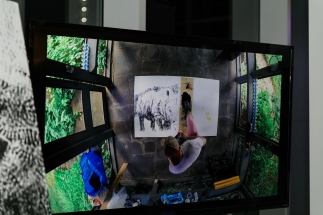 Guests sipped summer cocktails including the Paske 75 – a special concoction made with Empress 1908 gin. The gin is infused with the vibrantly tinted butterfly pea blossom that gives it a beautiful lavender hue. 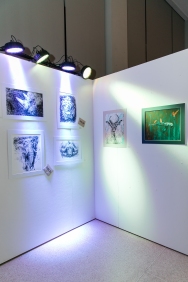 Paske mingled with guests and shared stories of his time in Zambia and what life is like for him now, living in London as a former British Army soldier-turned-artist. 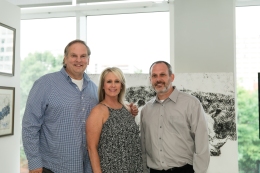 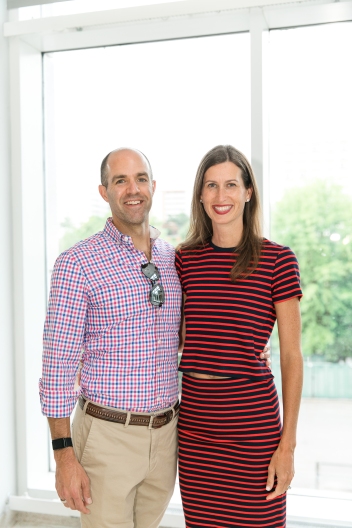 By night’s end, Art House members bought more than 70 pieces of Paske’s work, including smaller prints that he created as apart of “The Bigger Picture” project.  A portion of the proceeds from those works went to the Game Rangers International charity.

Additionally, Paske’s largest work titled “Two Volunteers” went to the highest bidder in a silent auction. Paske created this piece in Knoxville in the days leading up to the event.

Stretching nearly four feet by six feet, the work is a beautiful display of two African rhinos, and a time-lapse video showed the piece being made.

Art House extends a special thank you to Cazzy’s Corner Grill – the Presenting Sponsor for Painting with a Purpose. Cazzy’s executive chef, Kyle Russell presented his award-winning entree – lavender seared ahi tuna, atop a bed of fire-roasted brussel sprouts, edamame aoli, prosciutto crisps, and hemp seed. Guests had their choice of the tuna, beef tenderloin or roasted tomatoes for their main course. 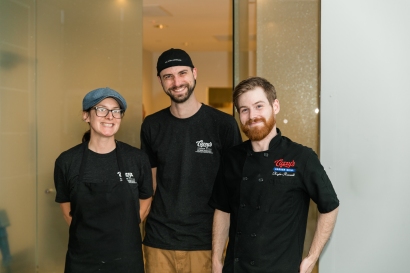 For dessert, the chef kept it light and summery with his acclaimed honey pistachio and pomegranate Panna Cotta, with bee pollen and milk crumbles.

Furthermore, Art House is appreciative of the incredible support of our Patrons: Paige and James Bell, Kyri Zukowski and Dooley Tombras, Sylvia and Jan Peters, and Amanda and Jason Hall. 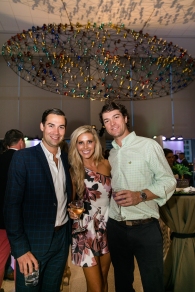 We also thank our Grand Patrons, without whom the event would not have been possible:  June and Rob Heller, Ali and Fred Smith, Allison and Reid Lederer, The Swag and The Knoxville Graphic House. 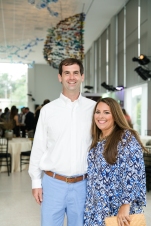 The Art House committee thanks all who attended Painting with a Purpose!

Art House is taking to the streets of Downtown Knoxville for the first event of its kind for our group: a Graffiti Crawl!

We will take in the sights and talk with the artists behind some of Knoxville’s most impressive street art.  From the London Streetscape Java Alley and the Knoxville Music Mural, to the Miller Building Mural and Strong Alley, we will learn about these larger than life creations that make our city unique. 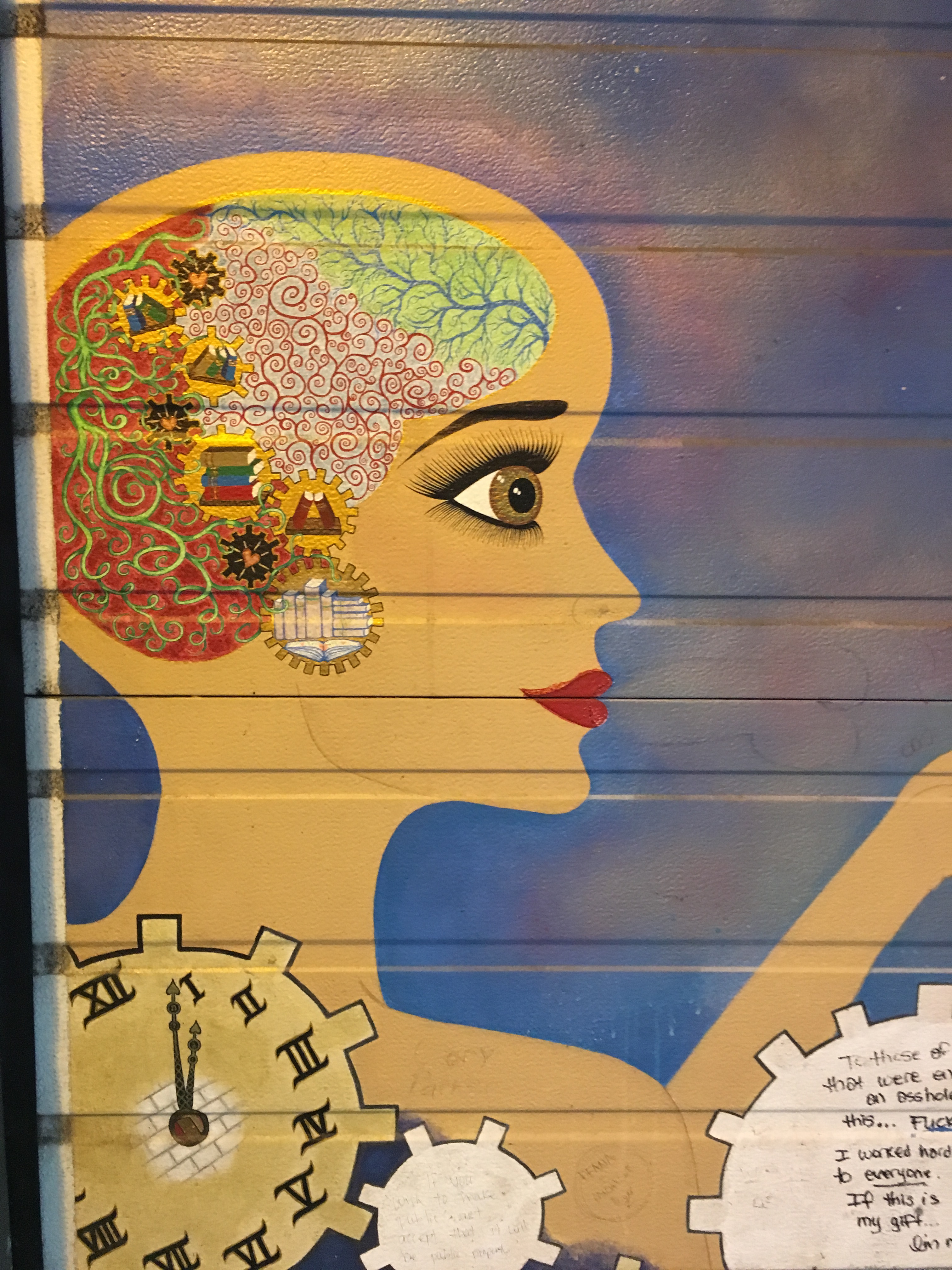 There will be small bites and libations offered along the way.  To start off, meet at the Crown and Goose in the Old City and we will begin the tour!  Again, the event starts at 6pm on Saturday, July 28.

If you can make it to the Graffiti Crawl, please email Mollie Turner at metucke@gmail.com