One of the most important parts of acquiring art pieces for your home is framing it and hanging it!  That’s where experts like Todd Richesin and Jeff Hood come in.  Jeff owns the District Gallery in Bearden; he has worked with interior designer, Todd Richesin for years, helping their clients find the right framing that will work with their space.

So, on Thursday, September 13th, Art House will gather at the District Gallery in Bearden to learn the ins and outs of framing art. Wine will be served, as with *almost* all Art House events!  And afterward, we’ll head to Kitchen 919 for those who want to continue the party!

Since so many Art House members acquired art recently at Painting with a Purpose, members, who bring their pieces by Freddy Paske, will receive 15% off framing.  So, look out for a text message to RSVP to this event!

On the last Saturday in July, members flocked to the private room at the Crown and Goose in the Old City for cocktail hour before embarking on the first annual Art House Graffiti Tour. While waiting for everyone to arrive, members enjoyed a few drinks and a delightful spread of London gastropub inspired appetizers, compliments of the house.

Before setting off on our late afternoon excursion, Jayne McGowan, the featured guest, our fearless leader, and, most importantly, the creator of the Artist Alley Revamp Project, kicked off the event by giving members’ a brief history of the impetus and evolution of the artistic endeavors featured on the tour as well as her initial inspiration and ongoing involvement with the project.

For those of you who may not be familiar, Jayne McGowan was a founder of the Artist Alley Revamp Project in 2010 and served as one of the initial driving forces behind the artistic revival of both Java and Strong Alley, whose efforts, along with many other collaborators, eventually transformed the alleyways into spectacular downtown destinations. McGowan’s inspiration for the project was her answer to a call for both communal and personal healing, a strong desire to revive and restore beauty in an otherwise neglected space.

The highlight of the tour was the exploration of the eccentrically curated street art occupying the historic walls of Strong Alley (Downtown, Stop 4) and Java Alley (Old City, Stop 2). McGowan constantly reminded us of the living breathing nature street art and the constant evolution of the alleyways by the very nature of the art form.

While in Strong Alley, Jayne recounted the origin story of her idea for the project as resulting from epiphany one fateful night during a cigarette break in the alleyway (Strong Alley) above her apartment. After that moment, she worked passionately as the unofficial curator, bringing together local business owners, city officials, and artists to remake the dark alley ways of downtown and the old city into vibrant passageways celebrating the diverse perspectives of local to (rumored) international artists.

Shane Sandberg, Cody Swaggerty, Cynthia Markert, Brian Pittman, and Dominique Thibault are just a few of the incredible talent that contributed to over 120 works found throughout the alley. It is even rumored that popular European street artist and one of the artists featured in Banky’s 2010 documentary film Exit through the Gift Shop, Space Invader, has contributed to the walls of Strong Alley. (Fun Fact: Art House will be screening the documentary in the KMA’s South Garden this fall, stayed tuned for more
details).

While not our main focus, the tour also included stops to view two of the numerous large-scale murals sprinkled throughout downtown and the surrounding areas. The first stop on our tour was conveniently located on the walls of the Crown and Goose outdoor courtyard. Known as “London Streetscape,” the 60 foot mural depicts just that, a 19 th century London streetscape. “Postcard from Knoxville” was our third stop and is found on the left side of the Knoxville Visitor Center on Gay Street. The iconic images of the region depicted in the mural pay tribute to ‘the artists, musicians and visionaries that continue to make Knoxville a great place to work, live, play and visit.’

The tour concluded at Sapphire where our members sipped on a graffiti
inspired gin cocktail and enjoyed trading thoughts about the art we had all just
experienced. The most important takeaway from the evening: the incredible
commitment to transform public spaces throughout the city into works of art.
Art House wants to give special thanks to Crown & Goose, Sapphire, and
Jayne McGowan.

Art House is thrilled to visit the Knoxville Museum of Art’s archives for a third time. Mark your calendars for WEDNESDAY, August 29th at 6:30pm. 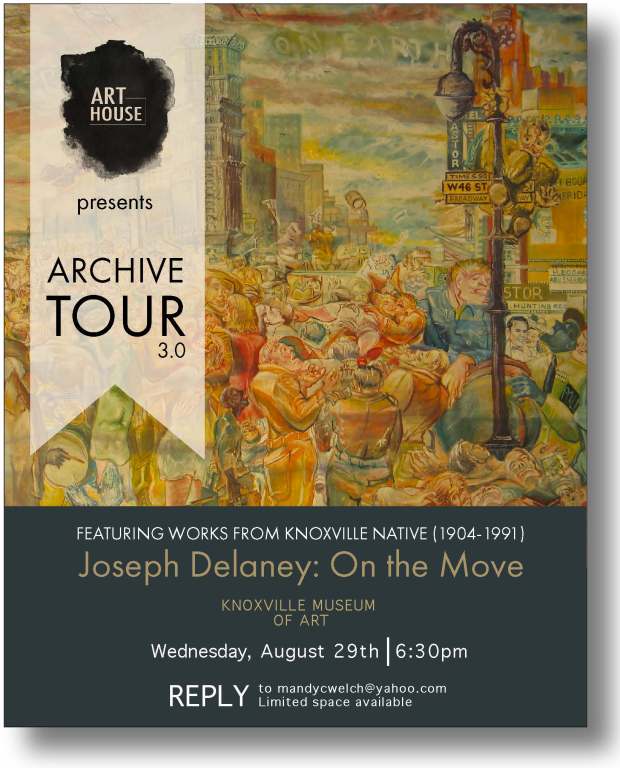 Museum curator, Stephen Wicks will personally escort Art House members to one of the museum’s most secretive spaces. The archive room is not open to the public and only Art House members are invited to this exclusive event.

Wicks will share details of the works in advance of their installation on the gallery walls. We are particularly excited to see art by Knoxville born, Joseph Delaney (1904 – 1991).  In addition to the enrichment, drinks and appetizers will be served as well.

The Archive Tour was the first event of its kind when Art House first launched at the start of 2016. Art House members should receive a postcard in the mail with details of this event, as well as a text message.