Art House is all about experiencing art, whether we are hearing from a curator, talking with a collector, or watching an artist in the act of creating art. We find ways of digging deeper into the different facets of art.

On October 5, the Knoxville Museum of Art will be the literal backdrop for the screening of a film that will take us inside the story of street art. Our group recently took a look at our city’s own graffiti, but this film explores what happens when fame, money and vandalism collide on a global scale. 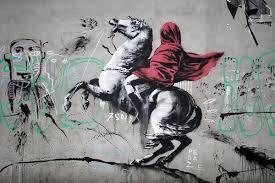 The documentary, “Exit Through the Gift Shop,” follows an eccentric shop-keeper turned amateur film-maker as he attempts to capture many of the world’s most infamous vandals on camera, only to have a British stencil artist named Banksy turn the camcorder back on its owner with wildly unexpected results.

The infamous, shadowy British graffiti street artist Banksy has literally left his mark on cities throughout the world. And in this film, he exposes the low-level criminality of street art, as well as the comradeship and even incompetence.  It’s been called “an enthralling modern-day fairytale…with bolt cutters.”

Admission to this film screening is FREE to Art House members.  For the public, admission is $5 in advance; $10 at the door.  Cash bar and tacos from SoKno Taco available for purchase.  Art House members will also receive one free drink, but bring cash for dinner and more margaritas!  We will gather on the lawn of the June and Rob Heller Garden at the KMA.  We hope to see you there.